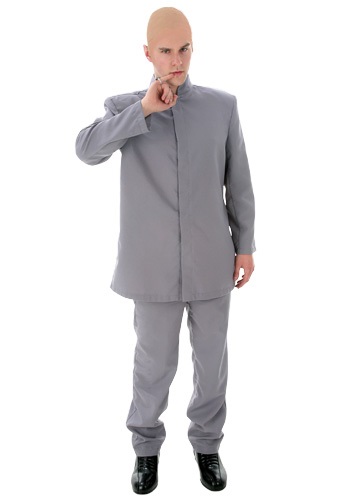 Most people don't want to be the villain. Everyone want's to be the hero, the person that everyone pats on the back at the end of the day, the guy that gets a big statue in the middle of town. But we are begging you to reconsider. Being the bad guy's not all that bad. After all, every job has its perks. For one, you'd no longer have to worry about having a conscience. No more worrying about being evil, because you can rest easy knowing you are!

You also get to plot for world domination. Trying to take over the world would be hard, but it would also be a lot of fun too! You get to hang out with your friends in your secret lair, and if they upset you, you can just feed them to sharks that are wearing laserbeams on their heads. That sounds kind of fun, now doesn't it?

This is the perfect get up for any villain. Villains don't worry about dressing flashy, they let their crimes do the talking for them. And if anyone ever said anything bad about them, well, then you just throw them into a volcano. That's why you will be wearing this simple grey jacket and pants. The look is simple, yet menacing, and the straightforwardness of the look matches your evil personality beautifully. This is the kind of jacket that says "Don't mess with me, you won't make me angry, you're simply beneath me."

When you become a supervillain, how will you take over the world? You could employ an army of sharks that wear lasers to patrol the world's oceans? You would completely control all boat traffic, crippling the world economy, and then you can bend them to your will. That's just one idea. Whatever you decide to try, we wish you good luck!