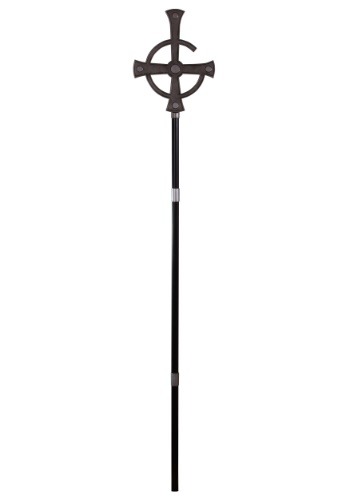 BY YOUR POWERS COMBINED?

Whenever you have five people hanging around each other who wear similar outfits and are identified by five elemental signs, you know that something mystical is about to happen.  Now, on occasion, they might turn into a superpowered environmentalist.  But, other times...

Turns out that you can also create a Satanic Priest with a heavy metal voice mighty enough to call down the angels!  Such is the case of Papa Emeritus — or is it Cardinal Copia? — the lead singer of the epic Swedish band, Ghost.

Well, if you have been summoned to bring dark entertainment to all, you better come along with all your accessories.  Once you've got your face dolled up and are wearing the reversed Roman Catholic garb, it is time to tote your Ghost Papa Staff to let all know who has the real power in the band!  (You might not even have to sing if you've got this around!)

As an enigmatic lead singer whose identity seems to be just a little bit in flux, it is important to have the right accessory to keep your image alive.  That's especially true in Ghost, where the lead singer replaced himself with a particularly aged priest.  This staff might be a serious necessity to get around!  Maybe upgrade it with a Bluetooth mic and really blow them away!