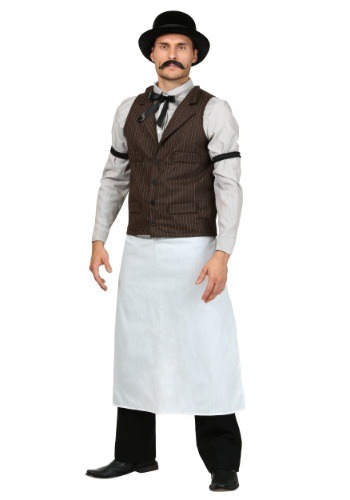 Let's say you're going to be in an old Western movie. Which character do you want to play? The heroic loner who rides into town with a tragic past? Bad idea. Most of them don't end up living all the way through the film, or if they do, life doesn't get any less tragic. The morally upright town sheriff? Also a bad call. They don't have the highest survival rates around here. You also don't want to be some poor joe-schmoe in the bar. The likelihood of you getting shot by the bad guy as an example is pretty dang high.

If you want to survive the film, we recommend you consider being someone like the local bartender. Think about it. No one wants to shoot the bartender! Who would serve the drinks? Yeah, as far as roles go, a bartender would be a pretty safe bet for making it through the film alive.

Of course, you'll need to look like an old-timey bartender then. We're talking the whole shebang. We make it easy with our Old West Bartender Costume. This costume comes with a pinstriped Oxford cloth shirt with buttons up the front and ribbon bow-tie attached. The pinstriped worsted vest has front buttons as well, and 4 false pockets. The satin ribbon garter arm-bands are gathered over elastic and the white broadcloth apron has simple waist-ties. Just get yourself a fancy mustache and hat and you'll be the epitome of Old West bartender.

This way, you'll be an integral part of the plot, but not necessarily in the cross-hairs, if you know what we mean. Just don't be surprised if at least one bar-fight breaks out. Those are like, required when it comes to old westerns. Oh, and do us a favor? Don't try to stand up to anyone. That'll drastically reduce your likelihood of surviving as well.