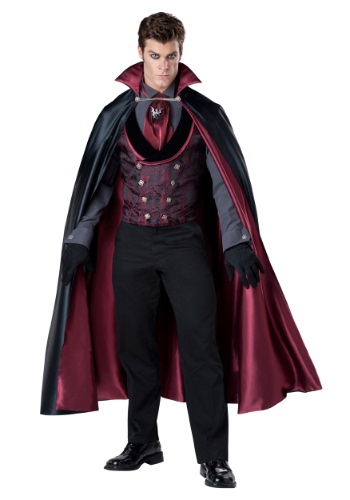 They say one of the original legends that inspired nocturnal blood-sucking monsters came from Eastern European villages, where recently buried bodies would sometimes be dug up, and found to have smooth skin, long fingernails, and hair still growing...If you add that to a coincidental disease being spread throughout the town—bam! You've got yourself a vampire. Obviously, the legends grew and changed over the centuries, but the fact remains, there was something creepy going on in those villages, right? Well, this Men’s Nocturnal Count Costume is your chance to capitalize on that creepiness.

We’re not sure when the dead vampire bodies became associated with wealth, but that won’t stop us from saying this outfit is snazzy and sharp as fanged teeth. It certainly doesn’t look like something someone was buried in! No way. This is the outfit of a real vampire, who’s been living large in a castle for some time now. And it could be yours!

There are many fine features to this look that would probably just kill it at the local nocturnal-being night scene. The brocade vest is double-breasted and has a black satin back that adjusts for fit. Gray shantung shirt sleeves on the vest have fancy French-style buttoned cuffs. The dickey has a peaked collar and a sewn-on dark red taffeta ascot, while the satin cape (really, who can pull off a cape anymore except a Count of the Night?) has a high collar, black shell and deep red lining that fastens with a chain loop over two neck buttons. Finally, a bat-shaped metal pin accents the look and is set with a heart-shaped faux gem. The haunting ensemble will strike fear into everyone unfortunate enough to cross your path.

Now, all you have to do is make sure not to get caught by any sort of pitchfork wielding mob, stake-armed monster hunters, or the rising sun. We hear they tend to be pretty unforgiving toward night creatures—even the most well dressed ones!