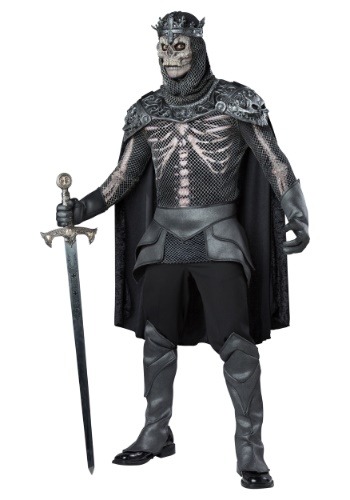 Let’s face it, you weren’t the greatest king when you were alive.

You were usually too concerned with counting your gems (a long and arduous task) or stuffing your face full of roasted boar to bother much with the needs of the commoner. This led to them refusing to pay their tithes, refusing to work, and eventually, marching on your castle. Usually your knights would be there to protect you, but unfortunately you’d just dispatched all of them rustle you up some more boar meat! Is that a guillotine? The commoners had improved their carpentry skills considerably since last you’d been down from your gilded tower. So yeah, you made quite a few mistakes during your tenure on the throne, but who hasn’t, right? Everybody deserve a second chance, and the Men’s Skeleton King Costume is here to assist you with yours.

To begin your transformation from dead king to king of the dead, simply slip into the pullover tunic and marvel at the bare rib-cage and arm bones of your terrifying new form. Next pull on the hood and overshirt to armor yourself in convincing printed chainmail and attach the grim skull-shaped pauldrons to your shoulders. The belt, boot covers, and gloves come next and lend the armor a heavier look by imitating steel plating while the crushed velvet cape suggests your nobility. Finally, attach the molded crown mask which will complete the look and reveals to the world that the king has returned!

You may not have been a very effective monarch your first try, but you’re back with a new wardrobe and ready to try again. Whether that means leading a legion of the undead to destroy the peasantry or attempting diplomacy as a walking corpse--the choice is entirely yours, Your Highness. Our Men’s Skeleton King Costume is equally suited for the recently deceased nobleman or the newly obsessed LARPer who wants to bring their roleplaying games to the next level!