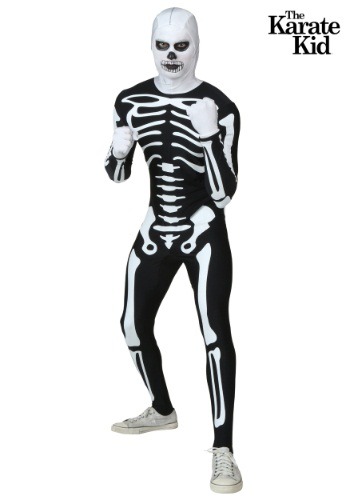 Regardless of your feelings about Johnny Lawrence and Danny LaRusso, you have to admit, the Cobra Kai costumes for the school party were pretty rocking. Seriously, if you saw four or five people dressed in these outfits sprinting full speed at you, you’d be pretty terrified.

In other words, you need to pick one of these up. Would you rather dress up as a man in a shower? No, that’s pretty lame. You need to throw on this Karate Kid Authentic Men's Skeleton Suit and intimidate into submission any enemies that come across your way. We’re not saying you need to chase those same enemies down a grassy field, corner them against a chain link fence and beat the life out of them if you don’t get your way. Definitely not. That’s a Cobra Kai kind of move, and you’re not necessarily a Cobra Kai kind of guy--you’ve got way too much discipline, self-control, and centered inner peace for those kinds of violent shenanigans.

And in any case, you don’t want to potentially ruin this suit by performing complex karate attacks in the dirt and mud, do you? Of course not. You just want the suit so you can look pretty cool in the dark at any social gathering or costume party you may be going to. And let us tell you what, this officially licensed jumpsuit, complete with white gloves and partial hood, is probably the coolest costume we’ve seen since it first popped up in that surprisingly violent scene from the 1984 classic movie.