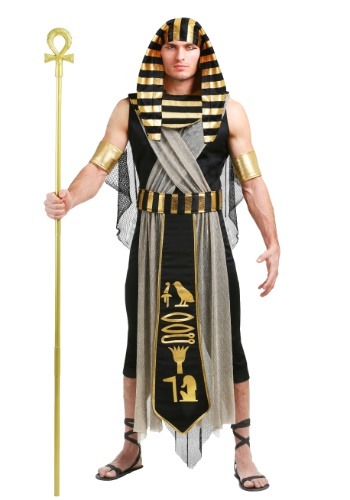 Being forever remembered as a pharaoh would be pretty awesome! These powerful rulers made certain they wouldn't be forgotten anytime soon by making massive monuments to commemorate themselves. The most popular way to commemorate yourself was obviously the pyramids, considering the fact that we still appreciate them today!

This costume will transform you into an all powerful king of Egypt! The costume comes in primarily black and gold, a color scheme that comes off as both powerful and regal. You'll be wearing a cape and a belt, which has a printed drape down the front. The other two accessories for this costume are the armbands and the headdress! The headdress makes this costume instantly recognizable, and while the armbands are made of foam, they make you look tough as nails.

WHAT WILL PEOPLE REMEMBER YOU FOR?

When you become a pharaoh, King of the Nile, what will people remember you for? Maybe you brought greatness to Egypt and invented the first flying car? Maybe you're remembered as being able to eat the most crocodile bratwursts in under a minute. It doesn't matter What you are remembered for, just remember to make yourself a pyramid!