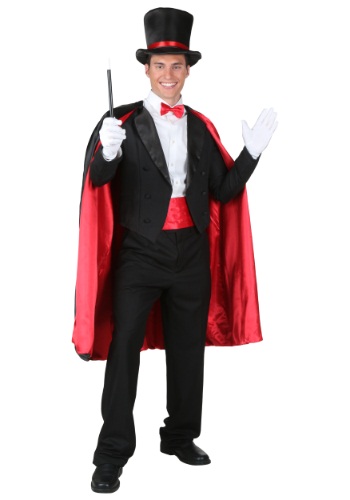 People always say that with great power comes great responsibility, and magicians are no exception! Magicians have the ability to manipulate the way we see things, the way we experience things. It's a very impressive skill, but if it were to be used for the wrong reasons, just imagine the mischief an irresponsible magician might cause!

A particularly skilled magician would make for a master pickpocket, snatching things right out of your hands and then slipping them out their sleeves, right next to that bouquet of flowers they always carry. Magicians would also have absolutely no trouble sneaking candy into a movie theater either. They could carry massive amounts of popcorn in their hat, then sit down in the theater and use the hat as a bowl for the duration of the movie! A magician with bigger aspirations could probably accomplish any mischievous goal they set their mind too, and that is why their skills can be so intimidating.

This Men's Magic Magician Costume comes with everything a magician and a showman will need! You'll be wearing a black jacket under your black cape, which has a red lining to give this costume a bit of flair. To match the color of your cape, we've also included a red bowtie on an elastic band and a red cummerbund. The finishing touch for this costume comes in the form of a hat on your head! The hat has red accents and is perfect for carrying everything from a rabbit to Halloween candy!

When you head out in your magician's costume, we only ask that you please be responsible, and be good! We know that you can probably do whatever you set your mind to with your clever tricks and deceptions, but just because you can doesn't always mean you should! Just remember, that with great power comes great responsibility.