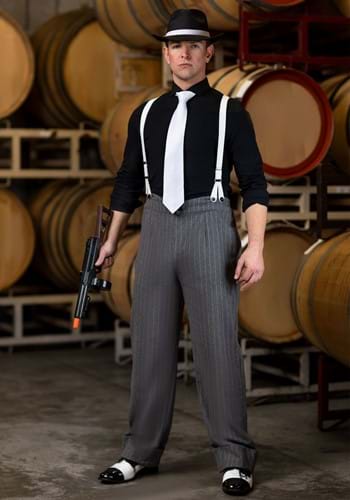 KILL THEM WITH YOUR LOOKS

Nobody is going to pretend that the mob of the 1920s wasn't super dangerous.  The weapons and willingness to use them obviously could speak for itself.  But, there is a certain kind of mystique about the mob that also makes them so compelling.  Maybe it's the whole family idea.  All bonded together either by blood or cause.  Perhaps it is that deep bond that gives them that incredible draw.

Or it might simply come down to the fact that since they were engaged in so much organized crime that they could afford to look fantastic.  Ever heard of a mobster that looked like gutter trash?  Heck, even the ones who were named Gutter Trash still managed to look refined and studly while they were holding up the bank and telling the coppers where they could go!

Time to channel some of that 1920s charm for yourself and you won't need to go bank robbing to be able to afford the look, either.  We can help you out with this Mafia Underboss Costume.  The elastic in the back for guaranteed fit and a zipper fly with a top button for that keen style.  The elastic suspenders attach to the pants with buttons so you don't need to worry about the cheap claw and teeth types!  Fasten your satin necktie over your choice of button up shirts and we might recommend finishing the look off with a '20s style gangster hat.

You won't need to engage in the actual organized crime in order to draw in the compelling charm of the old-timey mafia.  The right look is all you'll need to pull together the swagger.  Stun them with a smirk and that vaguely intimidating-yet-sex wink and everyone will be throwing their attention your way until the dawn comes.