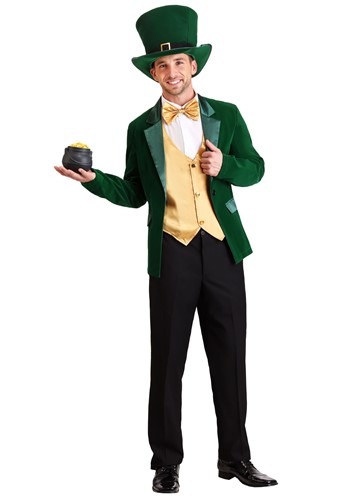 Have you ever wondered why a leprechaun dresses in green? Well, originally the Irish fairies dressed in crimson like their cousins the far darrig and clurichaun. It made sense for a time because all 3 cousins were of a solitary type and full of mischief-making schemes. Dressing in similar fashion, kept them easy to relate. But the far darrigs got nasty with their tricks, swapping babies for changelings or making peaceful sleeps terrible with gruesome nightmares. And the clurichaun cousins took their love of the party too seriously until they became a sodden mess instead of a playful prankster. So, after too many years being tied to the lot and feeling sick about the comparisons, leprechauns decided to distinguish themselves with a fancy new look! Instead of red as a warning, green suggested leprechauns were of a calmer nature. And though the trickster fairies didn’t quit their mischief, the choice definitely made them standout amongst other wee folk!

Celebrate the world’s favorite mischief-makers in style with your own Lucky Leprechaun Costume. This Made by Us exclusive is a flashy update of the familiar leprechaun look that is sure to shine in a crowd of St. Patrick’s Day revelers! The costume starts with a gold satin vest with golden buttons. Combined with the green velvet jacket, you’ll look like the richest leprechaun. An included gold tie and green velvet top polish off the look. All you’ll need are a pair of snazzy buckled boots and trousers to bring your leprechaun look together!

When you’re getting ready for your St. Patrick’s Day celebrations, look to the leprechaun for wardrobe inspiration! The little standouts have a look that’s as rich as their pots of gold and with this Gold and Green Lucky Leprechaun Costume, you will too! So, whether you’re leading the parade or joining the crowd of merry-makers this leprechaun look will have you ready for the fun!