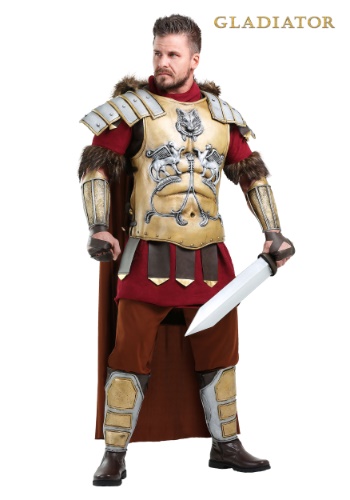 When General Maximus made his famous speech at the beginning of Gladiator, we knew we were in for a epic movie! And we sure were right! Maximus became sort of a legend around the office for a while after that. We often quoted lines to each at the water cooler, and shouted “As One! As One!” as we entered the conference room for a terrible recurring meeting every third Friday of the month. So, if you were as into this blockbuster movie as we were, then you’ll love this costume we put together: the Men's Gladiator General Maximus Costume!

Pick up this outfit and feel the strength of the Roman legion flow through your veins. The tenacity and courage of a gladiator that challenged a Roman Emperor will rest on your shoulders. And as Maximus said, “What we do in life, echoes in eternity”...so, no pressure, but make sure to use that power wisely!

This detailed look is perfect for pulling off a classic legionnaire style! The faux leather tunic secures around the back and is covered by shirt with attached fur cuffs on the sleeves. Laid over that is soft molded latex shoulder armor that attaches to chest armor of the same material. Leg armor goes on top of the included pants, and wrist gauntlets perfectly match the rest of the costume armor. The dramatic Roman legion cape has attached faux fur trim and secures to the shoulder pieces for that extra authoritative presence that says (in Latin), "I'm a champion. Don't freaking mess with me!"

So whether you wear this armor to pump yourself up before asking your boss for a raise (like some of us did last week) or to face down a barbarian squad in your LARP league, feel brave and remember: your actions will stay with you forever!