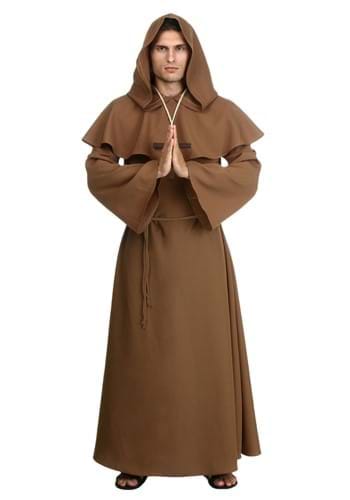 Alright, so you may not agree with us, but when we debated on what was our favorite characters/profession for medieval stories are, we all ended up agreeing: the monk. Yeah, yeah, we know. Most people would go for the princess or the knight. How typical. But think about it. Who's the character that usually gets all the funny lines? The monk. Who's the underdog with the heart of gold trying to save the world because it's the right thing to do? The monk. And who is the one that usually has hidden fighting skills and talents, or the right item at just the right moment? You guessed it. The monk.

You know we're right. Think of any monk character you've ever read or seen (no, not the evil guys parading around as monks, those don't count), but the actual monks. They're the best of the best. And even better? They're so humble. So inconspicuous in those huge brown robes. Who would ever suspect a monk?

Which is exactly why we offer this Brown Monk Robe for all of your monking needs. We're not sure if you're on a secret mission for the queen, or trying to support a rebellion, but chances are that you'll need the right outfit for the job if you're looking at becoming a monk. Our brown robe is made out of poplin and has flared sleeves, a wide cowl collar, and oversized hood. There is even a cord belt, not to mention hook & loop fastener at the back so the whole ensemble is easy to get into. Just pop this on and you'll be ready to blend in with the masses (while saving the kingdom of course).

You know, traditional monks also often shaved their heads too... What? Oh no! We're not recommending you remove your hair to get in character! Who do you think we are, method actors? No, as far as we're concerned, all you really need is a solid robe like this one and you'll look perfect for the part. Now, go show them how it's done!