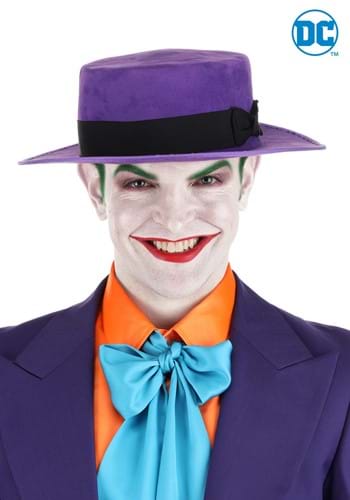 Jack In The Hat

If you're planning on causing all sorts of chaos in the city of Gotham there are two things that you can count on. One, that Batman will put a stop to your dastardly plans. Two, that it's going to end up on the news. With that being a certainty, you're going to want to make sure that you'll look good when the cameras start rolling! The last thing you want to deal with is a bad hair day. That's where this Men's 1989 Batman Joker Suit Hat comes in handy.

Designed to resemble the hat worn by Jack Nicholson in Tim Burton's hit film Batman, this stylish hat will complete your Halloween costume. Now, you can show all the Joker fans why your favorite iteration of Gotham's infamous Clown Prince of Crime is clearly the best. Not only is Jack's the most stylish, but he is also the most prepared when it comes to being in the limelight.

The Devil is in the Details

Our top costume designers brought this devious accessory to life. It is made to look like Jack Napier's signature flat top hat. It stands out from other flat tops with its wider brim. Around the crown, there is a black ribbon with a black bow. Bring this notorious comic book/film villain to life this Halloween with the help of this masterfully crafted accessory!