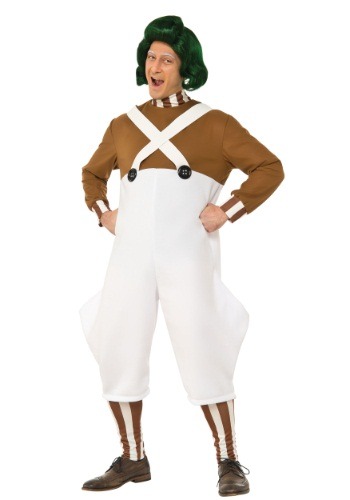 Alright, so the song gets a little fuzzy after you've had a few extra doses of the bubbly soda that Mr. Wonka keeps hidden in the secret container underneath the terror boat.  But, after you've had a long day trying to squish blueberry children and regrow TV kids into the regular size, having a breather and a little of Willy Wonka's private reserve is more than earned!

That said, the turnover for the Oompa Loompa workers can be surprisingly high.  It isn't like Willy is an easy guy to deal with!  Pretty high maintenance and you don't even want to think about what happens when one of his candy creations goes exactly the way of his name and things get really wonky.  Fortunately, in this modern age, now that Charlie has taken over, things are a little more relaxed.

So, put your feet up, take a breath, and how about you take to the city for a night and see how the rest of the population lives.  Dress up proper in your officially licensed Deluxe Oompa Loompa Men's Costume and get ready for a really fun evening.  This jumpsuit has attached suspenders and giant plastic buttons that are just like the style you've gotten used and the leg warmers have stretch fabric and extra room at the knees so you know that you'll look the part.  Pick up your vivid green wig and some orange face paint, because we can't have the outsiders know the secret!

HAVE A BREAK ON WONKA'S DIME

It is time to break out of the chocolate factory for the night and enjoy an evening on the town.  Get those songs ready and have your first taste of an alcohol that isn't immediately dependant on soda or chocolate.  Like... a rum and coke... or a kahlua.  Hmm... actually, maybe that explains some of Wonka's personality a bit.