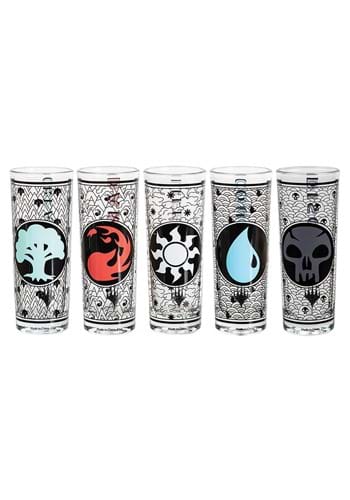 Building a new deck? What color? If you want those big, beefy creatures, then you're going to want some green. Maybe you want to fire off some lightning bolts straight off to your opponent! You want some red in there. Oh, and what if your opponent tries to put the hurtin' on you? You'd better put some white spells in there to protect you. Hmm, blue has some really sneaky tricks to catch your opponent off guard. Then again, black can just destroy everything! You'll definitely want that! Why not just put ALL of the colors into a five-color good stuff deck? If that's how you build decks, then this Magic the Gathering Shotglass Set is for you.

This shot glass set is officially licensed from Magic the Gathering and it comes with 5 different glasses, each based on one of the colors from the game. Each one has the colored mana symbol on one side, with a printed word on the other side representing the color's playstyle. Green has "Creatures." Red has "Damage." White has "Life Gain." Blue has "Counter." Black has "Discard." You can use them for imbibing special potions or use them as toothpick holders for your next gaming night.