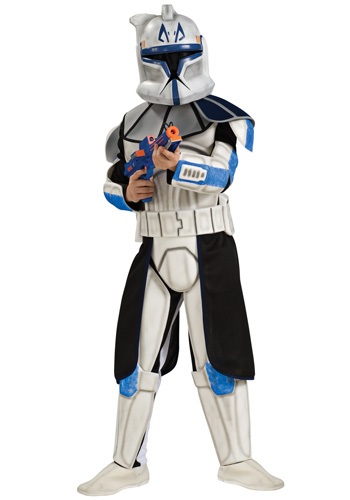 Who is braver than Captain Rex? Maybe Anakin, but he's a cowboy and one of the main characters, so we were bound to see a ton of his crazy exploits. Because of the super dangerous missions they constantly went on, Rex had to make many hard decisions throughout the Clone Wars series. It's because he doesn't see himself as simply a clone but as a person whose choices decide who he is. He also extends these feelings to his subordinates. Rex is also very cunning and tactical. Because he took orders directly from General Skywalker, he was very often smack dab in the middle of many near-hopeless situations. But Rex has been around the block and has a sharp eye for strategy and combat, so he can usually think his way out of most sticky situations. Formerly designated CT-7567, Rex was a veteran Clone Captain, Clone Commander, and Advanced Recon Commando. He commanded the Grand Army of the Republic's famed 501st Legion of clone troopers during the Clone Wars. He is well respected by Jedi and clones alike. If you admire Capt Rex, you will enjoy sporting our Kids Ultimate Star Wars Clone Trooper Rex Costume.

If you want to pull off this Rex costume at the next Halloween party, there are a few things you should know. This outfit features a black and white jumpsuit with attached armor and a foam neckpiece that fits over the shoulders, perfect for captains looking for a well-fitted costume. Every soldier needs solid footwear, so this costume comes with white shoe covers. Completing this outfit is a rubber belt that looks precisely like Rex's (you might even have to give a few orders; it looks so good). If you are a fan of Star Wars Clone Wars, you will pop a clanker for our Kids Ultimate Star Wars Clone Trooper Rex Costume!