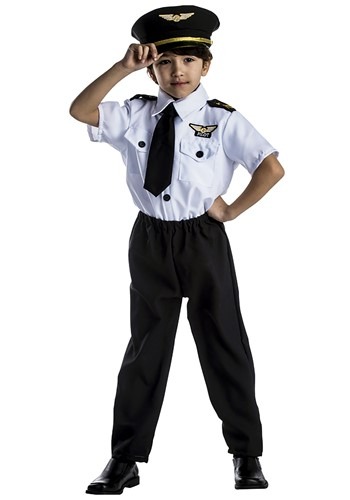 Being a pilot would be awesome, we don't blame your little one for wanting to be one! You'd get to fly all over the world, exploring each corner of the earth and getting paid to do it. One week you might fly to Hong Kong, Then to London, Then to Mexico City, then home again! And just like that, you traveled the world.

As fun as flying would be, we think we would enjoy the time spent exploring in between flights would be best. While you are waiting to fly back to wherever you are from, you might get a night or two in wherever you've flown too! That means you can go out and explore the city, talk to the people, try the food, learn their customs. You could become pretty well cultured through these little day trips around the globe! Sounds pretty great, doesn't it?

This costume will have your child looking like the real deal! They better not wear this on an airplane, people might be expecting them to climb into the cockpit and fly you to your destination! They'll be wearing a white shirt with an attached tie, and all the badges, buttons, and pockets to make this shirt like an official pilot's shirt! To help sell the look, we've included black pants and the hat! The hat has a rigid visor and a wing emblem on the front that will leave no doubt as to your child's profession.

A LITTLE BIT OF TRAINING

Before you let your kiddo fly anywhere, we think a good amount of training is due. Why not start them off riding a bike, then maybe driving the car, then maybe flying remote control planes? When you're talking about going thousands of feet up, practice might be a good idea!