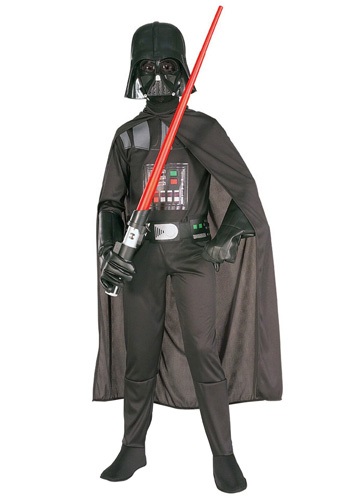 We all know the origin story of Darth Vader: He started out as a plucky slave named Anakin Skywalker, who had a knack for building robots and a powerful connection to the Force. It wasn’t until much later that he transitioned into Emperor Palpatine’s menacing right hand. But what if Darth Vader started off bad? Can you imagine a little Vader, running around, wreaking havoc? It would be super difficult to be his parents. If you dared put him in time-out for sassing his grandma, you’d risk being Force-choked. Imagine trying to break up his fights with his siblings—you’d risk losing a hand to a lightsaber. You’d never be able to stick to the rules, because he’d always play Jedi mind tricks on you. And he’d probably always be able to talk his way out of trouble by insisting he wasn’t “the one you’re looking for.”

It’s probably a really good thing that Darth Vader became evil when he was (slightly) less capricious and immature. But if you really want to get a glimpse of a junior Sith Lord, you can buy this Kids Darth Vader Costume for your own little Star Wars fan. The Darth Vader jumpsuit has a control pad printed on the front and a screenprinted belt that ties in the back. It also comes with a Black Sith Lord cape and plastic Darth Vader helmet mask (the gloves are separate, though). Just add in a red lightsaber and your little Sith Lord will be ready to take over the galaxy!