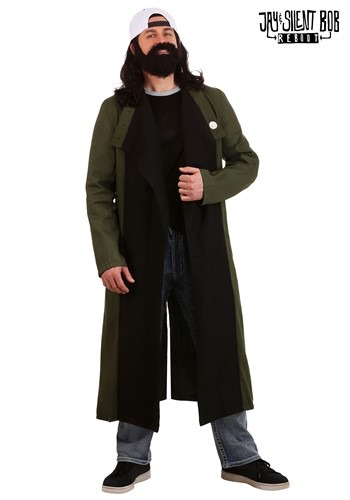 He Who Does Not Speak

It's pretty common for the quiet ones to be those with the greatest insight. And if that philosophical phrase is true, then Silent Bob might be the wisest person to have ever lived! He almost never speaks and he only does when he feels the need to drop some serious wisdom. Combine that with his crazy array of gadgets and odd paraphernalia, he's equipped to take on any problem that his nitwit best bud, Jay, ends up dragging him into. Of course, if you want to step into the role of the silent hero, then it's time for this Silent Bob Costume from the Jay and Silent Bob Reboot.

This officially licensed costume comes with everything you need to step into the role of Silent Bob. Well, it comes with everything aside from his sage-like wisdom and that killer beard! It starts with a cotton trench coat that comes in a dark green color. It closes with buttons in the front, but we recommend wearing it open and casual, like Bob usually does. The shirt is a black, long sleeve shirt that has gray detailing near the neck to help match Bob's signature style. Finally, the cotton hat is a classic baseball cap style with a white crown and a black bill. It has an adjustable band in back for fitting. Put it all together and you have a look ready for just about any sort of wild adventure.

If you're ready to share your silent, sage-like wisdom with the world, or if you just want to tag along with Jay for some serious snootchie bootchies shenanigans, then you're ready to dress up like Silent Bob from The Jay and Silent Bob Reboot! Just remember to let Jay do all of the talking!