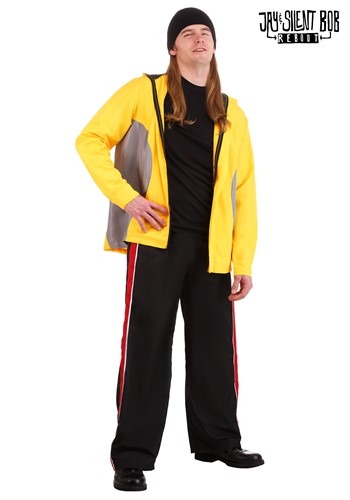 Now, we would love to tell you all about Jay. He's quite the animated character. (In fact, sometimes he's actually even animated.) Unfortunately, there are several obstacles preventing us from doing so. Most importantly, the folks who work in legal have informed us that literally every single quote that has ever come out of Jay's mouth contains such an imbalanced level of cursing that even the words that aren't normally profanity are considered filthy because of the words they've been hanging out with.

So, we came up with a brilliant way around that problem. We'll just have his best buddy, Silent Bob, tell you about him!

... Well, apparently that didn't work. Who knew that he wasn't prone to digital communication, either!? Seeing as how we can't give you a whole bunch of inspiration on what Jay might say, let's just leave it at the idea that he's loud in every aspect from looks to volume but still manages to have a soft heart buried way under his aggressive exterior!

Join the View Askewniverse as the brightest and boldest of all characters with this officially licensed Jay Costume from Jay and Silent Bob Reboot and so many other Kevin Smith films. Our devoted designers have followed every step of this duo in order to create this replica of Jay's look, including Jay's loose-fitting windbreaker pants (with red racing stripes!) and his iconic bright-yellow rain jacket. All you'll need to decide is if you want a knit cap or baseball hat version of Jay.

Turns out that there is one phrase that one can always quote from Jay, no matter the rating or mixed company. That's probably because nobody actually knows what these two words mean. (That probably means that they're also foul curses, but don't tell legal that!) Have all the fun, invent some new catchphrases, and maybe even save the world while you strike back in this Jay Costume.