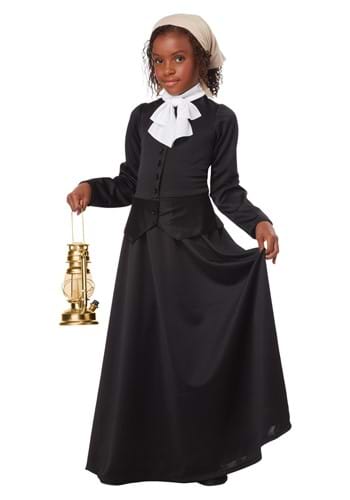 Your little girl was selected to play Harriet Tubman in her school's play; that's fantastic! Of course, the school is encouraging all the kids to DIY their costumes (don't even get us started on schools' arts budgets these days), but your little one is so into her character, she is eager to make sure she represents her right, down to the last detail! Fortunately, we have this Harriet Tubman Costume available, which will prove just perfect for a dramatic retelling of one of America's most important stories.

Your daughter can really get into character now that she's robed in this authentic costume; she'll perform to critical acclaim (hey, 4th graders can be pretty critical!) as she describes each of Tubman's achievements to the audience. It's hard to know if she's caught the acting bug, or if this eagerness and dedication is Harriet-specific, but either way, her enthusiasm is infectious (even from our obstructed view seats)!

In this period-perfect look, your little actress will be the highlight of the school play. The costume features a black dress with an attached peplum at the waist, and buttons down the front. When on stage as Harriet Tubman, she’ll get to wear the ruffled collar and signature headscarf. With a little practice, she should be able to tie the scarf on quickly enough to get back on stage in time for her cue, without the help of a stage manager!

An Impassioned Part to Play

Harriet Tubman had a significant and crucially important role in American history, and we’re certain that your little girl can play the part well and do it justice. And don’t forget to record the whole thing! Although we have a feeling your kid would gladly reenact her scenes as many times as you ask her, so long as she's in costume!