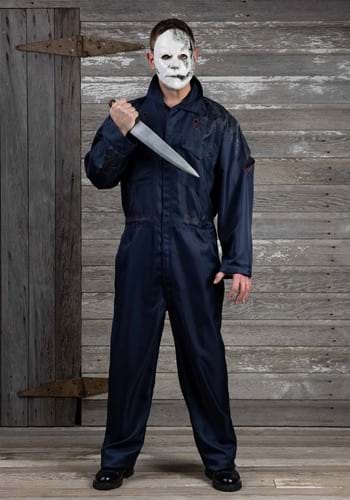 Maybe a Grenade Launcher This Time?

After 43 years, 12 movies, and countless jump-scares that have probably left us scarred for life, we have a TON of questions about Michael Myers. Number one: How does he move that s-l-o-w-l-y and still murder pretty much everyone in sight, including an entire mob of wrathful survivors and revenge-seekers? Number two: Why is his jumpsuit not burned to a crisp? (Does he have a secret supply of blue mechanic's coveralls somewhere?) And three, the most important question of all: What in the heck will it take to actually kill the guy? He's survived countless stabbings, body blows, an axe wound, and even a house fire. Is the secret to putting him out of commission something like a nuclear detonation? Is that going to be in the next movie? You know there's going to be another!

Pay homage to one of the longest-living (literally!) slasher franchises in existence with this officially licensed Halloween Kills Adult Coveralls Costume with Mask Combo! Myers' blue jumpsuit looks as ominous as ever, especially thanks to the realistic-looking blood stains and bullet hole graphics. The molded mask gives you his dead-eyed stare along with terrifying burn details. Eyes and nose holes let you see and breathe while you're plodding determinedly after your next victim.

We will never cease to wonder how Michael is still alive after all this time, but the best thing about our questions is that they never have to be answered. What we really want is an awesomely creepy film to make you flinch whenever the villain mysteriously materializes in the previously empty closet! "What will Michael do next?" we wonder as we make sure our doors are double-locked. Horror at its finest!