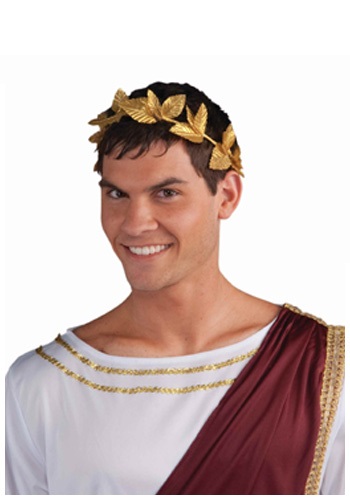 You know, back in ye olde ancient days, royalty didn't wear crowns. Or at least, not crowns like we think. We've been trained to think of metal circles with jewels and pointy spikes, but that wasn't always the case. For instance, can you imagine Julius Caeser in a crown like that? No. That'd be ridiculous.

What we're trying to get at here is that if you are trying to present yourself as some kind of Greek or Roman royalty (or god, goddess, or anyone who is worth being honored) you'll need the appropriate headwear. And that, of course, means laurel crown.

And if you're lacking a laurel crown, well don't worry. We've got you covered. Our Roman Gold Leaf Crown ought to be exactly what you need. This elastic band has gold colored cloth leaves attached. The leaves are tightly attached to the band and splayed apart as pictured. For this laurel crown, one size most Spartans, Greeks, and even Romans.

Although, this golden laurel wreath is pretty neat. We totally wouldn't judge you if you decided to wear it with other more modern outfits as well. Sure, some people will look at you strangely, but it'll probably be worth it to feel like a Roman Emperor. At least, we think it would.