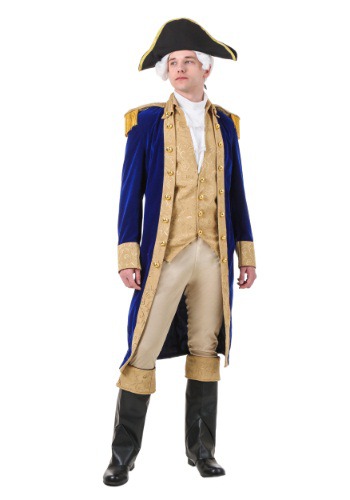 George Washington was an impressive man. He led the American Revolution to victory against the British, way back when America was much smaller and much more organized. But there are some other interesting bits of information that you might not have known about George. Have you ever wondered what his middle name is? Don't start wondering now, because he doesn't have one. Middle names were actually not all that common back then.

If he had a middle name, do you think we would have started saying it when referring to him? What if we had started saying "George Chad Washington". We have no reason to assume his middle name would have been Chad, it seems as good of a guess as any... We suppose it doesn't really make much of a difference, it's the man that matters, not the name! He still would have been elected president of the U.S. two times in a row, both unanimously.

Everything about this costume gives off the aura of strength and diligence that we expect from George Washington. From the navy blue jacket with gold trim to the golden vest underneath, this is exactly what you would picture on a man as impressive as Mr. Washington. The boot toppers will turn any shoes into awesome boots, and the ascot you will be wearing was a classic style of the time. Last but not least, you'll be wearing that wonderful hat. You just don't see hats like that around anymore, it's a shame.

George Washington earned his place on not one, but two pieces of currency! He also earned his place on the side of a mountain... How will you be remembered? We hope to have our face carved into a big rock in the desert. Not huge, just like a 6ft boulder of our face. And we want it to be unmarked, that way, when people see our boulder, they will think it was nature's doing. Little do they know, it was just us, FUN.com!