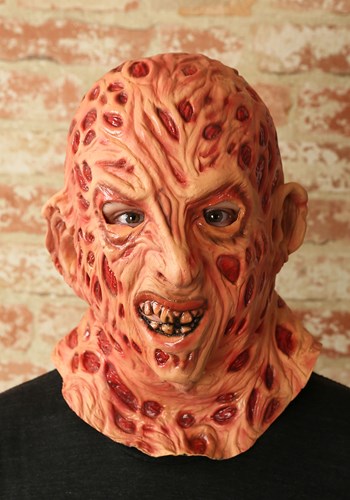 Most of our nightmares fortunately fade away from us shortly after we wake up.  Sometimes that waking up is a little more violent than others and occasionally the nightmares follow us for a while, repeating frequently while we slumber until we begin to be a bit paranoid that something might be after us.  Well, generally, we’d like to hope that it is just a case of thinking about it too much.  But, there are a few dream haunts that can result in some serious problems!  Unless, of course, you can get in their head for once!

And, we’ve learned that one of the best ways to do that is to take it literally.  With this officially licensed Freddy Full Head Mask, you can see the world from your tormentor’s position.  The natural rubber latex mask is carefully detailed with all of Freddy’s grotesque burn marks and plenty of room for your eyes to stare through.  Hopefully, once you get your head right inside Freddy, you’ll be able to dismiss any nightmares that are currently bothering you.  More hopefully, you won’t enjoy it so much that you start haunting others!