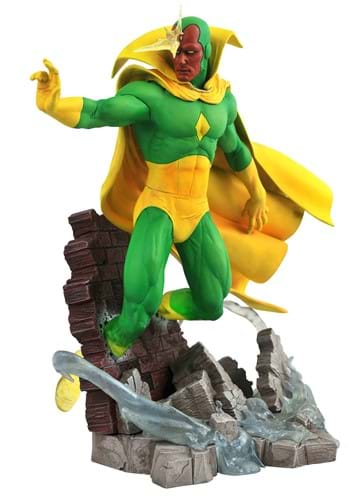 Vision has always been an underrated character. Until the Marvel movies came out, nobody was throwing the Vision on their top 10 favorite superhero list (we always thought you were cool, Vis). He has the strangest origin too, and that's saying something for a comic book universe filled with wacky origins. Like in the movies, Ultron is still his daddy, but this time his brain patterns are based on another superhero (we told you it was strange). His powers are still sweet, though: changing his phase of matter, flight, super strength, and last but not least, a freakin' laser beam on his forehead. It's no mind gem, but, come on, it's a freakin' laser beam. We hope you pick up this Diamond Select Marvel Gallery Comic Vision PVC Statue and give ole Vis the appreciation he deserves. Oh, and how cool will this look on your desk?