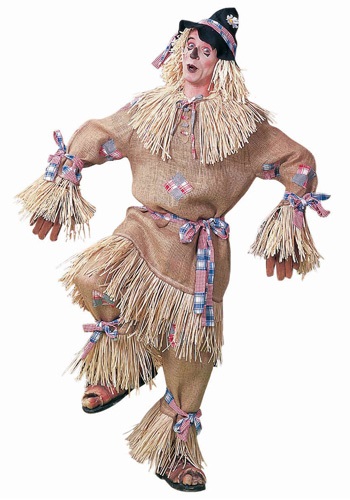 Scarecrows are kind of like valiant knights if you think about it. (don't think too hard though.) But really, look at their purpose. Their job is to protect a field (the citizens) from an evil outsider enemy (the crows/other birds.) In that sense, their purpose parallels a knight's pretty closely! Sure, they might not do their work with a sword, or really even move at all, but they are out there day in and day out, a constant vigilant sentinel. Rain or shine, your scarecrow will stand true.

Despite their heroic efforts, people are still rather afraid of some of them, and we can see why. A lot of it just has to do with context. Out in a cornfield in the middle of the night, there isn't much that WOULDN'T scare us. A puppy could come running through the rows up to our feet and we might faint from fear.

This costume will have you looking just like a watchful protector of some farmer's crop. You'll be wearing a tunic and pants, both made of burlap and lined with fake straw! They also have patches and ties around them, to look like a true farmer's scarecrow! The belt you'll be wearing is made of the same material as the patches and ties, and helps hold your straw filled body together! Last but not least, you'll be wearing a black hat, which also has straw on it and is wrapped in the same material as your belt. This will make you the most stylish straw man in the field!

When you head out as a scarecrow, make sure to let those birds know who's boss! If you see a crow, don't be afraid to give them a threatening glare, maybe even make a fist at them so that they know you mean business. Scarecrows have a reputation to uphold, and it's your job to see it done!