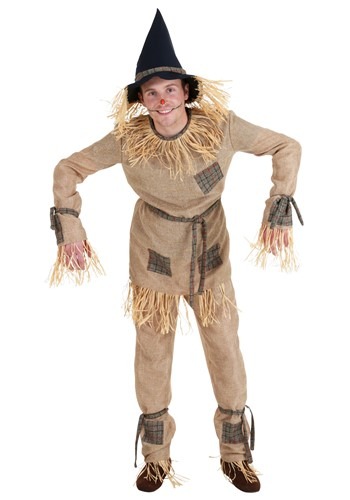 Well, how about that, this scarecrow isn't all that scary looking, is he? If we were a crow, we certainly wouldn't have an issue dropping in this guy's field and stealing his crops! It's not a bad thing that he's not scary though, that's the point! This scarecrow costume has more of a storybook feel to him, like the kind of character you would find in a kid's movie!

Sure, he's not too scary, but he's got a kind heart and he's doing his best! We probably couldn't do any better anyways. Standing out in the field, twenty-four hours a day sounds exhausting. We don't think that we would be able to do it. No, we think that we will let the scarecrow stick to his job, and we will stick to selling our job of selling all of the coolest stuff in the entire universe!

This costume will have you looking like a scarecrow! But, without the scariness. Would that make you just a crow? No, that's misleading... We'll just keep calling you a scarecrow! You'll be wearing a tan shirt and pants that have straw trim to make it look like you're stuffed with straw! They also have some patches on them and ties on the limbs to make it look like you've been getting worn out from all of your time in the field! Lastly comes the fabric belt and hat. Hats like this are essential for any scarecrow costume!

When you put on your scarecrow costume, what will you do? Will you be defending a field from the evil crows, or will you be trick or treating? Maybe you'll be defending something else, like your house! Standing in the yard, a watchful protector on the lookout for any kids up to some mischevious deeds. Whatever your mission, we wish you good luck!