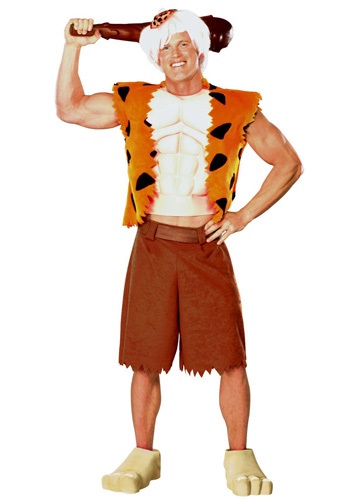 We all have fantasies: superhuman strength, invisibility, omnipotence, another season of The Flintstones. Have you ever wanted to be as strong as King Kong? Be able to flip a grown man back and forth over your head? Superhuman strength seems to be one of the most desired super powers in all of popular culture. But, what if you didn’t have to be bitten by a radioactive spider, or exposed to deadly amounts of gamma rays? What if all you had to be was a caveman baby?

That's where Bamm-Bamm Rubble comes in. Even as a toddler he is freakishly strong. He lifts his adoptive dad over his head, and slams him down on the ground repeatedly. (A lot like what Hulk does to Loki in The Avengers.) He has the natural strength of a person who grows up in the stone age.

So, if you want to flaunt the results of Bamm-Bamm's intense workout regimen, or his high sense of prehistoric, tattered leopard skin fashion, look no further. This costume is for you. Comfortable and fashionable, you can take the runway by storm with this Bamm-Bamm vest and wig/hat combo. It even comes with a club to fend off the paparazzi, if the caveman "bare-feet" shoes haven't already.

Bamm-Bamm, but with Words

This Halloween when your friends are all trying to be the strongest super hero at the costume party, you can show up wearing this Men's Deluxe Bamm-Bamm Costume. Because, as a toddler Bamm-Bamm had the same amount of strength as the massive Hulk. He didn't have to get bitten by anything, or exposed to anything to get his incredible physical prowess. And, he might be a toddler but he still gets the girl. Pebbles Flintstone. You can leave your friends with this parting shot: "How do you like them rocks?"