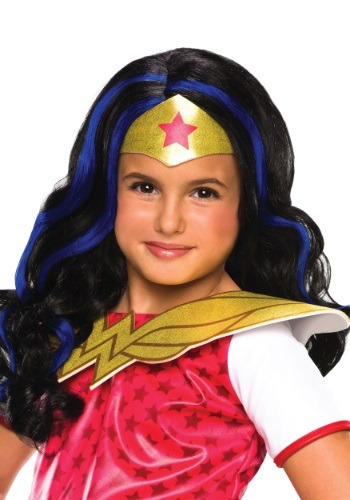 We could spend all day talking and ranking the various super powers that our favorite comic book heroes possess.  Generally, Superman tends to climb pretty high up there just because he has no many really good ones.  But, it doesn’t take very long before he’s knocked off the tops of the charts by his female counterpart, Wonder Woman.  Not only is she freaking strong, but half the versions of her character say she can fly, too.

Of course, of all her awesome powers, one seems to be overlooked.  It might not be the flashiest and isn’t likely saving many lives, per se, but it is one that would certainly make lives here in the office easier when we’re rushing to get in on time in the early morning and might do wonders for helping you get your kiddo ready in the morning!  Of course, we’re talking about her supernatural flawless hair days.  Whether flying in from the islands or going hand to hand with Doomsday, Wonder Woman’s dark hair is always on point and we are pleased to offer you the same ability thanks to this officially licensed wavy DC Superhero Wonder Woman Wig.  It’s dark synthetic fibers will hold their spectacular style all day while the blue strands will give it that supernatural appeal that’ll have all the bad guys thinking twice about confronting your kiddo!