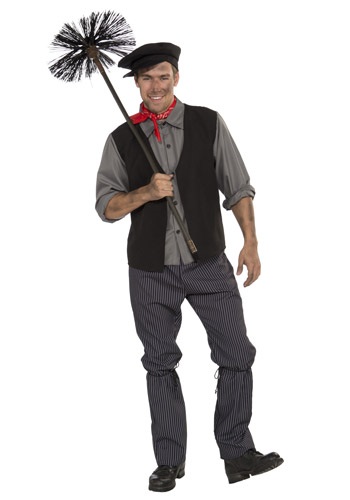 IT'S BASICALLY A TIMELORD'S COMPANION...

There are certain occupations out in the world that have largely gone by the wayside.  Jobs that just don't really have the solid requisite need to ensure ongoing employment.  The milk delivery folks, the sin-eater, and, also, we're pretty much gone with the need for the chimney sweeps.  It is a sad truth, but society must advance, even if that means the soot-faced gleemen and their odd little brushes fade into the past.

But, as doors close, new ones open!  And, especially for some of those cheerful chimney sweeps, they may come upon a reality-bending lass with cosmic comprehension and a dimension-bending handbag.  The speculative debate has already been seemingly won in fanfic corners all over the Internet.  Anyone with world hopping, time shifting, and virtually magical devices is probably a timelord, and we know for sure that a certain sweep gets along great with everyone!

So, whether you are interested in cosmic adventures with a pseudo-magical buddy or you have real interest in jobs from the last century, we've got the perfect get-up to help you get up and go.  Jump into this Men's Chimney Sweet Costume and you'll be ready to hop into all sorts of new worlds.  The outfit consists of a button-up gray breadcloth shirt and elastic pinstripe pants with ties at the knees.  (You don't want soot getting into your nethers!)  Add a red bandana and black poplin cap and a period-perfect vest and your look is perfected!

WHAT TO DO WITHOUT A CHIMNEY, THOUGH?

You wouldn't think that a retired occupation would be filled with countless magical opportunities, but that's exactly what you're served up with if you choose the right profession!  Toy makers and cookie bakers tend to get the most mystic traffic, but now that the chimney sweeps have no chimneys to sweep, it's cosmic sailing for you!  (Don't forget your brush, though, just in case.)