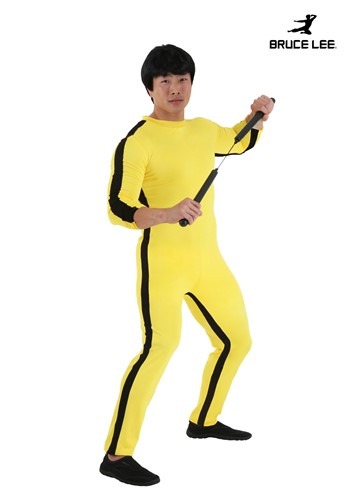 When it comes to the legend of Bruce Lee, there’s so much rad stuff to say about him that it’s almost like there’s nothing to say, you know? Like, what words would possibly do an epic great talent like him justice?

He fought with fists of fury! He was the real Chinese connection! He fought alongside the Green Hornet (actually he fought for the Green Hornet, since Britt Reid was more a lover than a fighter, but same diff!). He beat up the 7' 2" Kareem Abdul-Jabbar…and if we can be honest in this safe sharing space, we honestly still haven’t fully forgiven him for that, but we guess that’s just what unconditional love is all about, no? Oh yeah, and he could use any and all items near him to fight, which is a really useful skill, to be honest — but he was always at his best when he used nothing but his fists!

So it’s not a mystery why you might recognize this costume…it’s the most recognizable costume he ever wore not just because it was his last (#RIP), but it’s also gone on to have different honorable interpretations in Kill Bill V. 1, Revenge of the Nerds, and Shaolin Soccer. So whether you want to feel like you’re a walking piece of history or just want to affect a lil’ bit of the old Lee coolness, this Bruce Lee Costume with Wig is exactly the kind of thing you're looking for! We can't promise that it'll make you move faster and fight harder, but hey, can't hurt right? Might as well get some nunchucks and swing them around like he does in Game of Death, just to see!