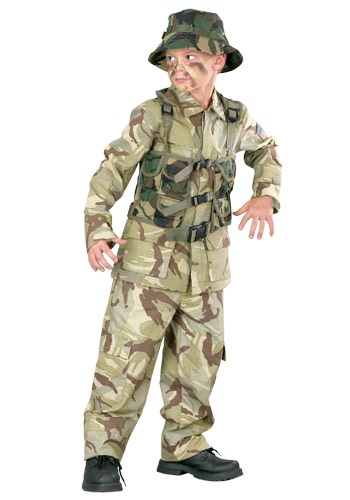 The Best of the Best

Your kiddo wants to join the fight against bad guys. He wants to defend his country, not just because he loves it, but because he wants to prove that there is no match for how strong he is, how brave, and how dedicated he feels to defending his territory. Well, it sounds like your kiddo isn’t made just for the infantry, or some desk job on a base in Ft. Hood. No way. Your little dude is made for Delta Force. That is—he’s made for being the best of the best of the armed forces! So pick up this Kids Delta Force Costume and let him feel right at home as he trains to become the number one defender of the place he calls home!

In this brave and bold outfit, he’ll be able to disappear into the backyard for days with just a few supplies and a nearly impossible mission to complete. Eventually, he’ll reemerge, successful and sworn to secrecy about the content of his mission. Fun!

Well, maybe it won’t be that serious. But he will have a lot of fun camouflaging himself into the backyard ferns and among the maple trees. He’ll train hard and long and this camouflage long sleeve shirt and matching pants are made to endure with him. The jacket features 4 pockets on the front and an American flag patch on the sleeve. The pants come with belt loops and the included vest has more tactical pockets, plastic clips, and an adjustable belt, all for the full effect of carrying out a Delta Force mission! Finally, a matching hat ensures that all of your kiddo is protected in the guise of camouflage (not to mention out of the sun), should he come up against any hostiles while on a backyard recon op.

Just make sure your little guy comes in to eat and have a drink every once in a while. It may be really impressive to stick out the limits of human potential that Delta Force training requires, but he’s still just a kid. Give him a donut or something and tell him to take a break! He's earned it!