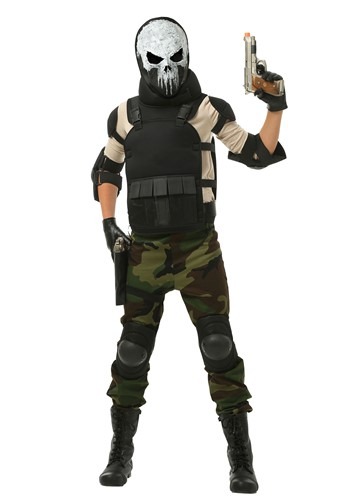 You know that saying, "the only thing we have to fear is fear itself?" Yeah, that doesn't hold up around your kiddo. To him, the only thing we have to fear is goblins, vampires, scary expeditions, and a host of other spooky situations. Ever since he was little, he's been obsessed with the scariest and spookiest and, in our humble opinion, coolest things in the world. As a tot, his love of ghost stories quickly surpassed your own inventive abilities, until he started writing them himself and reading them to you before bed. Sweet dreams!

To him, unless something is high-energy, highly scary, and has you on the edge of your seat, it's just not that cool. We get it. We really do. Now, he's ready to for a a new, inventive costume—and we think this Boy's Skull Military Man Costume is just the thing to delight his spooky senses! Even he couldn't come up with a combo so powerful and frightening, and that's really saying something.

This look brings together his two favorite worlds—military and ghouls—in a one-two punch that's bound to become his favorite costume in history. It features a tan shirt, camouflage-print pants, and a foam vest with decorative plastic buckles. But the true scare comes from the neck up, starting with the fabric hood that covers the top and sides of his head, leaving the face exposed to reveal this full latex mask, painted to look like a skull. It's totally terrifying. Other accessories, such as a belt, holster, shoulder, elbow, and knee pads, and gloves add to this outfit's authenticity. But really, who is going to argue with a creepy ghost soldier? No one. Like everything involving your kid, how scary he decides to make this look is entirely in his hands.

Since your son is an expert on all things high stakes and spooky, this look will land him among an elite team of costume heroes. He can wear elements of it separately, but when put all together, it creates a high-drama persona that will tickle the fancy of your fearless kid...and maybe even freak him out. Maybe.