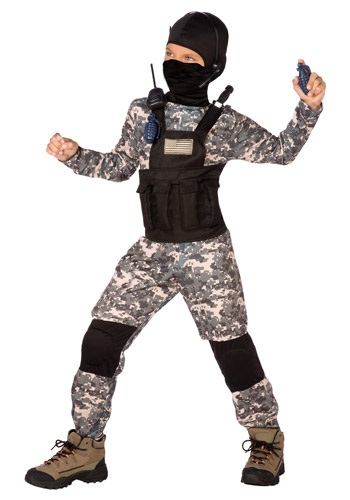 So, your little one wants to be a Navy Seal? That's a really impressive goal, good for them! However, this costume is a much safer way to start their military career. Now, they can plan soldier in the backyard, without any real threat. If you really want to go above and beyond, you could be their commander, give them special ops missions to complete. If you're feeling really clever, you could even try to get them to complete some household chores.

Maybe you tell the kids you have a special mission, from the president himself. Their job? To clear all of the leaves from the yard, without being seen by any traffic. That's right. You can give them "military grade" rakes, and they can hide in the piles of leaves as cars roll by. Otherwise, you could tell them they need to upgrade the perimeter defense measures, which is a fancy way of saying paint the fence. See where we are going with this? These missions could prove pretty efficient at finishing up some dreaded chores!

This costume is fit for even the most dangerous of household missions. The costumes primary piece is a military fatigue jumpsuit. This jumpsuit comes with attached knee pads and a vest with pockets. This costume comes with a black hood so that your little soldier's identity can remain a secret while they take out the trash. This costume also comes with a couple accessories, including a toy knife, walkie-talkie, and two grenades! (Toy grenades. Obviously.)

Still have some chores that need doing? As their acting general, you could always set them on Operation: Dining Extraction. This intense special ops mission consists of them clearing the dinner table without being seen, while you stand guard from the couch. We hope these ideas prove useful, good luck with your troops, commander!