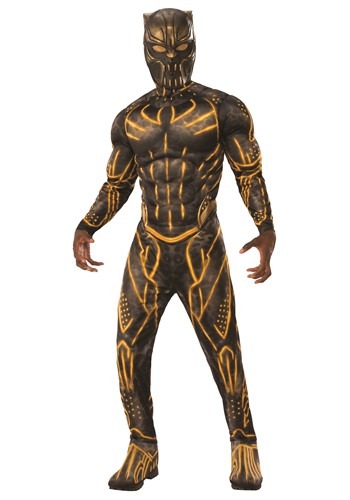 If you loved the Marvel Cinematic Universe's introduction to Erik Killmonger, you might be curious to know a bit more about this mysterious character. That's especially true if you're going to enjoy dressing up as the high-energy villain. First, his given name was N'Jadaka. He was given the name Erik Stevens by his father, N'jobu. He didn't initially know anything about Wakanda... at least until his father's plans to offer up Vibranium weapons to the oppressed.

We all know that Erik discovered the truth of his heritage, but the details get a little fuzzy from there. Inspired by his father's frustration with his people's oppression—and seeing Black Panther claws as the murder weapon—Erik's ambitions went a little dark. Maybe a bit more guidance from N'Jobu would have helped Erik avoid claiming the name "Killmonger" after a particularly effective campaign of killings during his time in numerous military positions. No matter how rough Killmonger would become, somewhere in there, his heart was (kind of) in the right place.

Bright a little more light to the villain of Black Panther with this officially licensed Deluxe Killmonger Battle Suit costume. This is a full-body jumpsuit that fastens in the back with hook and loop strips. It features the now-classic print of the enhanced Vibranium suit, including the bold gold details. Fiberfill padding gives you the look of peak-human perfection without the need to undergo the royal ritual while the included mask completes your transformation into the Usurper King and new Black Panther, Killmonger!

You know the cruel story of Erik Killmonger already. When you dress up in this enhanced Black Panther Battle Suit costume, you can showcase the same dark story. Of course, you could also tell a new version. Maybe seeing that Wakandan sunset changes this bloodthirsty orphan into the noble he might have been!