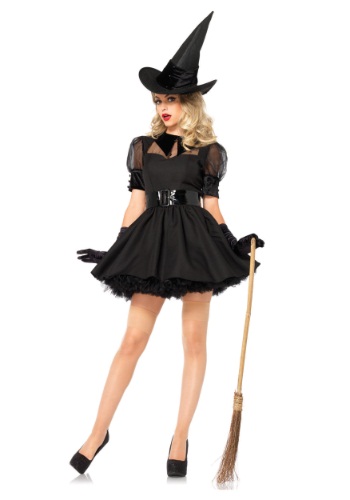 You are going to leave everyone completely bewitched, and the best part is you won't even have to cast a spell. They'll be completely bewitched by your awesome costume! That doesn't mean you couldn't try some more spell casting on the side. If you are going to look like a witch, you might as well play the part! The hardest part about casting spells is going to be finding spells to cast! You can probably google it and find some, but how will you know when you find the real deal?

You wanna know where we think you might have the best luck? An antique store! Go find yourself the oldest book possible, and see if it looks like it might have any spells in it. We know it's something of a wild goose chase, but we think it's the best chance you'll have.

This costume will turn you into the most fun witch in the coven! You'll be wearing a black dress made of 100% polyester. The dress has a sweetheart neckline and decorative buttons down the front. The sleeves are puffy, and the skirt of the dress is the same way! Over the dress, you'll be wearing the belt. The belt is black and is size adjustable! But, the most important part of this whole costume is the hat. The hat is a classic witch's hat that also has decorative buttons on it. All you'll need now is a broom to fly on and cauldron to brew in.

If you happen to find a real witch's coven, just be cool! If they like you (which they totally will, simply because of your costume), then they might be able to hook you up with some real spells! And just like that, you'll be a real witch!