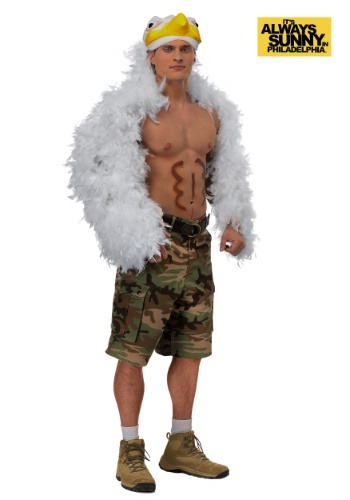 It's great to have best friends that you can change the world with. Mac, Charlie, and Dennis have been through a lot together. Sometimes they're just out to have a good time, sometimes they're looking for love, and sometimes they're out to change the world, though it doesn't usually end well.  When they made over the Juarez's house, they might have missed the mark. Turns out kidnapping a family and ruining their house isn't a great way to start a philanthropical redecoration project. And when poor Dennis tried to get on the environmental activism train someone had to go and be rude, sending him into rage mode. So when the gang set up wrestling entertainment for the troops, we braced ourselves. Little did we know it would be so epic. Actually, come to think of it, we probably should have known.

Dress up as one of the gang with this licensed Always Sunny in Philadelphia costume. The sleeves are covered in fluffy white feathers, making eagle wings and are connected to the sculpted eagle face hat. Pair the sleeves with a pair of cargo shorts and you'll be ready for the ring. Oh, and don't worry about going shirtless, you can always draw abs on.

We're excited for you to get together with your friends to entertain as the Birds of War. Go ahead and learn all the words, really let loose on the chorus! Just a word of advice though, don't wrestle an ex-priest who has addiction issues and a deep vendetta against your little gang. In fact, maybe you shouldn't wrestle at all. We know the closest you've ever been to athletes is the flippy cup tournaments of days gone by. As long as you stay away from the wrestling ring, we're sure you'll make the troops proud!