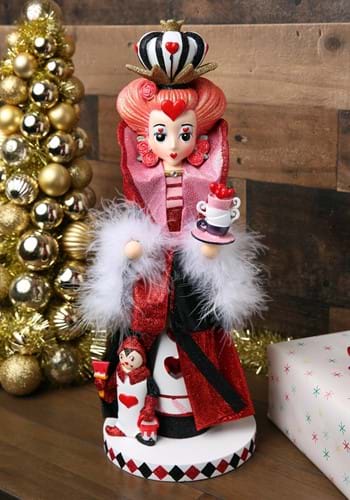 Off With Their Heads!

Once Alice falls into Wonderland, she has a very difficult time finding her way out. One of her last and most daunting challenges is dealing with the temperamental Queen of Hearts. She is in charge of all the playing cards and likes to play croquet with live hedgehogs and flamingos, which goes about as well as you’d imagine. Whenever someone slightly annoys her, she immediately shouts that they should lose their heads. (Although most of them end up just fine, since the King of Hearts quietly pardons them while she’s not paying attention.) However, she is still feared, and often considered a villain. She’s been imagined several different ways over the years, but she’s usually still intimidating, and she’s always a fascinating character.

If you’re a fan of this fantastic story, you might like this Alice in Wonderland Queen of Hearts 17.5-inch Nutcracker. If you like to have unique decorations for Christmas, this piece is a great way to display a character from a beloved story while also showing that holiday flair. You can also display this nutcracker near Valentine’s Day, or keep it up year-round to show your love for the character. And of course, it would make a great gift for anyone who loves this quirky queen!