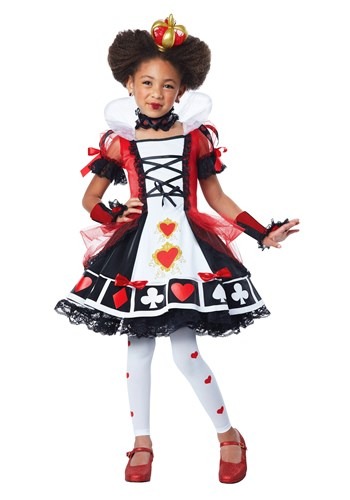 So, we hear your child has been displaying some...interesting...behavior lately. She's been seen bossing around her siblings and ordering the family dog to do things like paint the roses red, which as you know, is pretty tricky without opposable thumbs. She's getting a bit out of hand, it seems. But there is a super simple solution that's basically foolproof.

Dangle this Girl's Deluxe Queen of Hearts Costume in front of her and propose a deal. She will get today, and only today, each year as her "Queen Day," during which she can be a little tyrant. The deal is that you'll give her this getup and the freedom to rule for one full day, if she behaves and demonstrates all her best qualities (which are numerous) the rest of the year. When you see her eyes light up from the frilly fun of this costume, you'll know you've got her on board! Oh, and did we forget to mention, the "Queen Day" contract starts on February 29th!

This costume is as cute as it is chilling; we all know what the Queen of Hearts is capable of! This iconic look features a pullover dress with puffed tulle sleeves and printed corset "lacing," as well as playing card symbols along the skirt's flared hemline. Similarly, the leggings are printed with hearts down the sides. There's a lot of drama up top, from the sheer stiff organdy collar and the tiny molded crown. Everything about this look screams, "I've got power in spades, and I'm not afriad to use it (and look cute as heck at the same time)!" It's a mouthful, we admit.

Naturally, you're at least partially amused by your gal's antics. She is fiesty and adorable. But she'll be none too pleased when she realizes the significance of signing her tyrannical contract on February 29th. Maybe don't bring it up. She's bound to mellow before she learns about leap year, right? Gulp. For your sake, we hope so!