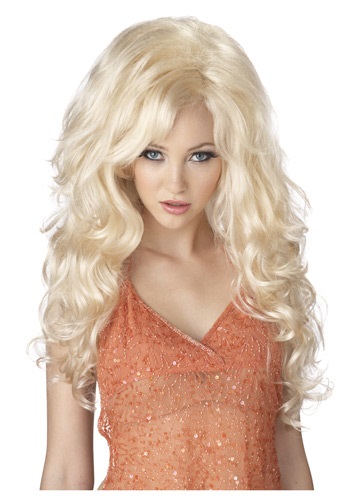 Blondes have more fun as Rod Stewart would say, and who could disagree with that? The evidence is everywhere! Look at Marilyn Monroe’s smile during her performances or Goldie Hawn’s for that matter. Surfers, some of the coolest and most fun people around are known for blonde hair! Let’s admit it, blonde hair holds a somewhat strange place in our culture-- it’s been fetishized, derided as indicating a lack of intelligence, and even used as a nationalist symbol. At the end of the day though, it’s just hair, and it’s about what you like and what you think makes you look your best. So if blonde hair is your preferred way to strut your stuff, let your blonde banner fly and embrace those golden locks!

If blonde is the color for you, then you’re going to love our Blonde Bombshell Wig! This wig is made of synthetic fibers that give the illusion of long, layered, bleach-blonde hair. This also has a slight bouffant at the top and a sheer nylon netting on the interior. Whether you’re trying to emulate the look of a Hollywood starlet, Goldilocks herself, or you’re just trying to strut your stuff in style, our Blonde Bombshell Wig will be the perfect addition to your Halloween festivities!