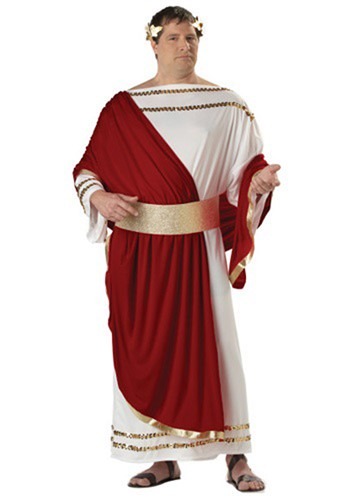 Caesar was an impressive man. He accomplished so much before being taken from the throne. He ruled all of the Roman Empire, and he invented a salad dressing, a salad dressing that we are very fond of. (No, we didn't fact check this, but why else would it be called a Caesar salad?) Regardless of what salad dressings he did or didn't invent, he was still a very impressive individual. Because of this, his costume will be one of the most timeless costumes we have ever sold.

All these years after his death, we are still wearing his costumes and saying his name. It serves as a testament to his huge impact on our world today! Heading out dressed as Caesar will have you feeling both regal and maybe a little paranoid, due to the unfortunate circumstances of his death. Don't worry, you won't share the same fate!

This costume will turn you into the Roman emperor Julius Caesar! Your costumes starts with a long off-white tunic that has a gold sequin trim. Over the tunic, you'll be wearing a deep red toga that has gold ribbon on it, meaning it'll match your tunic perfectly. The belt is faux leather and fastens around your waist with Hook and Loop fastener, and the crown is made of gold tone foil and is held in place thanks to an elastic band. All you will need now is an empire to rule, and you'll be just like the emperor himself!

AN EMPIRE TO RULE

Obviously, we can't sell you an empire to rule. But, if you happen to stumble upon one, we recommend that you read up about Julius Caesar. Finding out where he went wrong or what he should have done differently could be very important to your success while in charge!