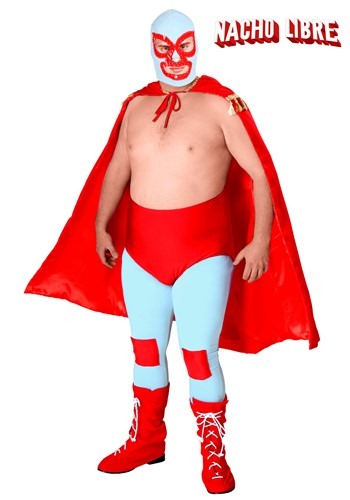 We’ve heard of some really hair-brained schemes, but trying to become a luchador to raise money to buy better food for the orphanage you work at is one of the crazier ones we’ve been privy to. Actually, hold up. Now that we think it through, that may be kind of brilliant in a truly unexpected and wild way! The person who cooked that one up must be a true genius of the highest caliber...

...or….it’s Nacho Libre, everyone’s favorite philanthropic luchador monk. And while Nacho eventually finds his way (and success as a wrestler), let Nacho’s story be a lesson to all you--it’s not a good idea to lie in church. It’s just not. After all, Nacho got caught red-handed disobeying the monastery’s rules when his robes caught fire! Now, we’re sure that won’t happen to you when you wear this Adult Nacho Libre Costume, but just in case, try to stay away from open flames. Or if you can’t do that, at least remember to carry around that bucket of water you used to baptize Steven, that would help.

Whatever you do in this costume, it’s go grande or go home! This officially licensed look is straight out of the film, with its satin-lined cape and gold tassel trim, tights with sewn-on knee patches, briefs, and boot covers. The luchador mask has cord lacing in back, so you can secure it on before the big fight. This costume can’t teach you to cook, but as it turns out, your crazy plan might just actually work out in the end!

Just remember, when you wear this Nacho Libre costume, you'll be doing it for the children! So get out there show the world your wrestling prowess and your intense compassion!