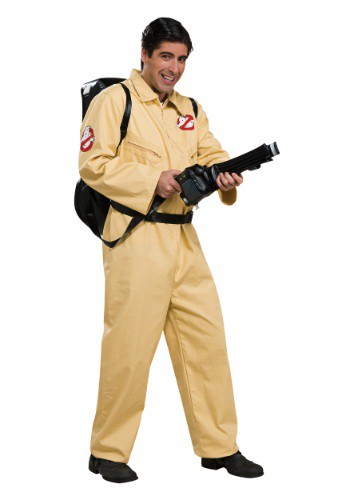 It’s been at least 24 hours since we last watched Ghostbusters. It feels like it was yesterday. It had one of the coolest songs in movie history, if not the funkiest, by Ray Parker Jr. It had the Ecto-1, the pimped out 1959 Cadillac with the most memorable siren in movie history. (Silent Hill takes a close second place on that one.) Ghostbusters had all of our favorite guys, too: Bill, Dan, Harold, and Ernie. Losing your teaching job one day and then fighting demons from another dimension using improvised energy weapons on another is a big story arc for a handful of regular guys like us.Ghostbusters has it all.

We’ve wanted to be a Ghostbuster for as long as we can remember. We once built our own Ecto-1 out of a spaceship we had made out of a cardboard box. Then when we were in high school, we got the only job we could find where they would let us wear a brown jumpsuit. Turns out that wasn’t a great career move. The problem is just that there are no ghosts! If we inherited a haunted mansion, we wouldn’t even take a million dollars to stay there overnight. We’d get in there and start proton packing right away. (Hopefully the mansion has colorful, catchable ghosts and not the kind like in The Grudge.)

If you share our enthusiasm about being a Ghostbuster, you’re in the right place. This officially licensed costume’s jumpsuit is just like what the pros wear in the Hollywood pictures, with big Ghostbusters patches and space for your own name as well. It comes with an inflatable ion pack and nozzle, so you’ll be armed and ready for the Stay Puft Marshmallow Man if he comes knocking. This is a quintessential group costume, too. You get three of your bros over, crush some Hi-C Ecto Coolers, and go bust some ghosts somewhere out in town.