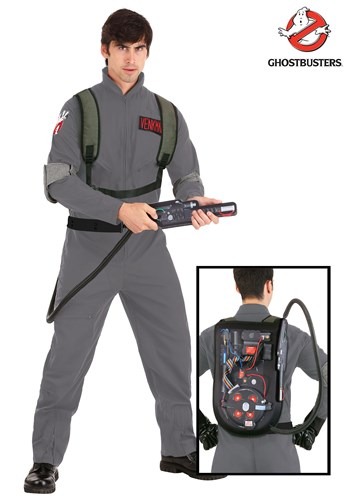 The Boys Are Back

It seemed like everything was over! Gozer the Gozerian had been defeated after an epic confrontation that ended in marshmallow goo splattering across New York City. The Ghostbusters had saved the day, Venkman got the girl, and the whole team got the full hero treatment. What could go wrong? Well, it turns out that an ancient god can cause a TON of destruction... even after being defeated by a team of four intrepid paranormal investigators and the mayor of the city isn't exactly on their side either! But you know what? You can keep a good team down, and those bustin' boys will be back any time there's a paranormal disturbance for them to solve!

Now, you can join the returning team when you wear one of our Ghostbusters 2 Plus Size Cosplay Costumes! They're officially licensed from the movie and have tons of great details that will please any fan.

This Made by Us design brings you a look straight from Ghostbusters II. The costume comes with everything you need for an authentic cosplay outfit! The costume beings with a simple gray jumpsuit that fits with a zipper along the front. The suit also features plenty of pockets in the front to help you keep your wallet and phone handy while you bust some ghosts. The shoulder has an embroidered Ghostbusters patch on it to round out the whole look. The costume also comes with a set of name tags, including Spengler, Stantz, Venkman, and Zeddemore. Finally, the costume comes with a backpack shaped like the Proton Pack from the movies. It comes with adjustable shoulder straps and a zipper closure on top. Put it all together and you have a look that'll have you ready to put the team back together.

Making Your Own Team

If you're looking to put together a crack team of Ghostbusters, then it all starts with this officially licensed costume from Ghostbusters 2.