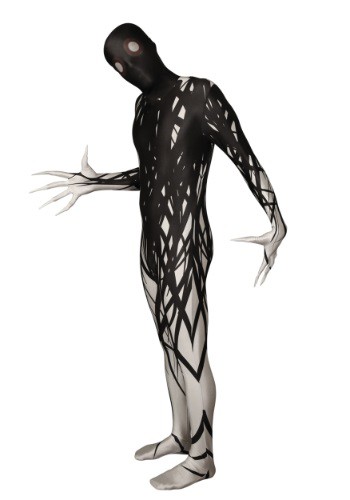 The internet can be a wonderful place full of great ideas and discussions. It created open lines of communication around the world and made people smarter, more aware of the world around them. It has helped new forms of education reach all sorts of people, and if you ask us, it has made a better world, overall. And then came along Zalgo.

It’s tough to even describe who or what Zalgo is. He is chaos, insanity, and The End. As in the end of the world. Zalgo is terrifying. And so if you’re kiddo wants to become the face of horror for their next costume party, then this Kids Zalgo Morphsuit is perfect for them. In this look, your child will be a real...showstopper. No one will be able to turn away. Just like the legend of Zalgo, your kiddo will demand all the energy in the room to be on them, and no one will be able to say no!

This costume comes straight from some of the darkest corners of the internet, where Zalgo resides. The stretch knit fabric jumpsuit fully encloses your kiddo from the head, to the hands, all the way to their feet. Vision will be a little obstructed when the hood is on, but it can be unzipped and pulled down in order to eat or see better. Now all you have to do is make sure that they don’t bring about the end of the world—but that shouldn’t be too hard, right? We're getting goosebumps just thinking about this costume come to life!

Good thing the real Zalgo is limited to just some creepy forums on the internet. It's way too scary a story (even for us) to  exist in the real world. Just uhh, be careful while your kiddo is rocking this costume...if you see lots of jarbled text and people without faces, you should definitely run!