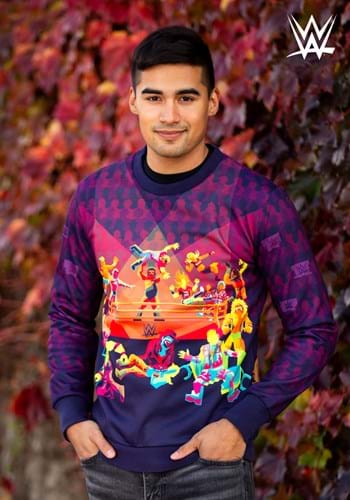 How to Start a Rumble

Step 3: Invite every wrestling legend from the WWE.

Step 5: Watch the chaos ensue, until only one person remains conscious in the ring.

Step 6: Crown the victor as champion.

Step 7: Repeat as many times as necessary.

Alternate method of starting a rumble—wear this Radical Rumble WWE Ugly Sweater and test your friends on their WWE knowledge.

This officially licensed WWE sweater is part of our exclusive line of ultra-cozy ugly sweaters, and it has a packed roster! Want us to list all of the wrestlers on it? Do you have a snack ready? You might need one, because this is going to be a minute! There's Mankind, John Cena, The Rock, Andre the Giant, Macho Man, Becky Lynch, Rowdy Ronda Rousey, Ric Flair, Kane, The Ultimate Warrior, Stone Cold Steve Austin, Bret Hart, The Undertaker, Shawn Michaels, and, last but certainly not least, Big E. Just ask your friends to name each wrestler on this jam-packed sweater and watch them squirm as they try to name them all!