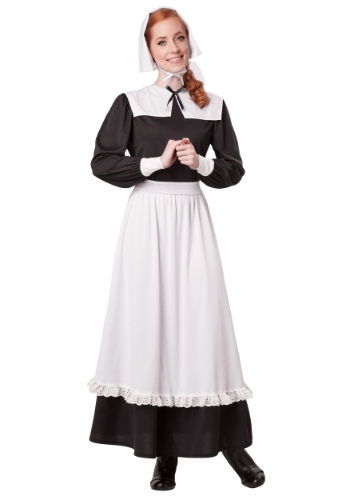 A Million Ways to Die in the New Colonies

After months of hardships at sea (not to mention some questionably lumpy hardtack), you've made it! You reached the New World! Religious reasons or wanderlust caused you to leave sooty England behind and strike out for the other side of the Atlantic to make your fortune. Odd, though - it seems like gold does NOT grow on trees here, as was promised by that travel agent. Also, there are a lot of unfamiliar bug and snake species that seem all too keen to view you as a walking smorgasbord. And then there's the whole matter of the natives, who don't seem very pleased to see you cutting down trees and "claiming land for the King of England." So that's weird. But it's ok, because you have a can-do spirit and a high tolerance for hard work! You'll probably need a high tolerance for salt pork and scurvy too.

As a pilgrim, you might have ninety-nine problems but a cool outfit ain't one! This Pilgrim Women's Costume will have you looking as though you just stepped down from Plymouth Rock. The black dress is ideal for churning butter and planting corn, thanks to its long sleeves and ankle-length skirt. An oversized white collar and white cuffs add some embellishments, as does the black ribbon at the center of the throat (but not too much embellishment so that no one can accuse you of vanity and burn you as a witch. You don't need that in your life.) Tie on the white ruffled apron and slip on the white cap and you're off to the barn raising!

Celebrate a colorful historic period with century-appropriate garb! You'll fit right in at the cornhusking bee with this lovely outfit.