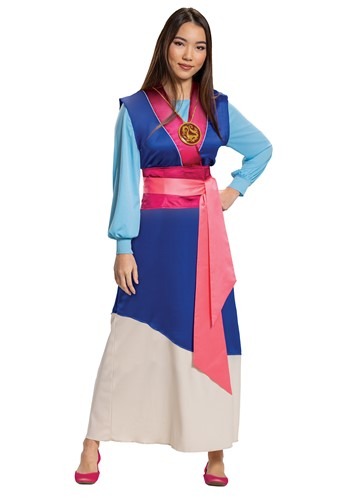 What Makes a Warrior

Honor, courage, fidelity, patience, a steady hand -- all characteristics of the tough and beautiful Mulan, a woman who's not afraid to do what needs to be done or say what needs to be said. That's not to say it's easy for her to figure out her next move, or execute it for that matter. She sometimes struggles eating breakfast without spilling on her dress, and we all know she had a hard time keeping her lucky cricket under control. But in the end, she exudes a confidence in us that she's the one who's going to prevail.

Our officially licensed Mulan Women's Blue Dress costume comes with the belt, sash, and necklace seen on the model. Rather than wear two separate skirts, the white and blue sections of the dress are one, and the light blue blouse is also attached, making this an easily worn dress. The wide, magenta belt has a velcro type fastener at the back, and the lighter pink sash ties on top of it. Finally, put on the emperor's medallion, for distinction and proof of all your hard work for your country.

For someone that does better when meeting up face to face with an army of Huns rather than meeting with the matchmaker back home, Mulan has quite a few beautiful gowns. It's not hard to understand how her family would assume that she would have easily been set up with a suitor. But beauty isn't enough to tie this woman down. She has a need to learn and grow, even as she wears her silk gowns. The sheer shawl is just like the one she wore to go see the matchmaker. Lucky for you, this gown is shorter than the original so it'll be much easier to get down to business and defeat the Huns.