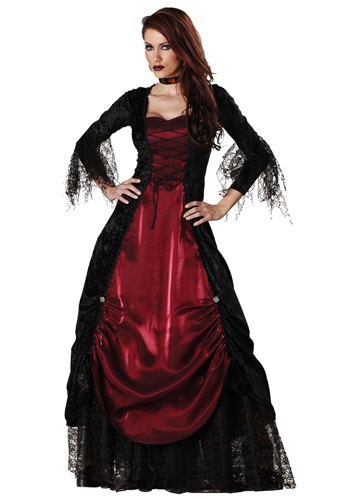 VAMPIRES: THE PICKIEST EATERS EVER?

Vampires might be some of the pickiest eaters alive. Well, we suppose they aren't technically alive, so we will rephrase that. Vampires might be some of the pickiest eaters undead. But think about it, they only drink blood. You almost feel bad for them. They don't get to appreciate the finer things, like authentic Mexican cuisine or a new york slice of pizza. No, all they want for breakfast is blood, and maybe for lunch they'll have some blood, and for dinner? You can probably guess that it'll be blood.

Imagine trying to host a party for your vampire friends. You make all of these nice little cucumber sandwiches for people to snack on, but your vampire friends won't take them. Instead, they just keep staring at your neck. That would be really frustrating, you worked hard on those sandwiches, and you are not a snack!

This costume will have you ready to crawl into a coffin after a long night of work. This costume starts with a dress and petticoat, which comes in a dark, deep red. You could almost call it the color of blood. Seems kind of fitting, right? The ensemble is detailed with layers of black lace, giving it a classy yet tattered appearance, something you would expect on a vampire. Last but not least, we have included the choker necklace! The choker necklace is set with a faux red gem on the front and is made to match with the dress beautifully.

When you go out as a vampire this Halloween, we feel as though we should point out that not many people will be giving away blood to the trick or treaters. We just don't want you to be disappointed when you don't get any blood in your bag. But if you're okay with that, then you're set to have a lot of fun!